Polyelectrolyte layer-by-layer (LbL) assembly has shown promise as a route for fabricating thin films with controlled thickness and designed functionality. This technique begins with a substrate with an excess surface charge on which alternating layers of polycations and polyanions are deposited by dipping the substrate into a dilute solution of the appropriate polyelectolyte salt. Thin films incorporating a variety of functionalities have been demonstrated using this technique, due in large part to the fact that the construction of the film is predominantly controlled by electrostatics (hydrophobic interactions may play a role as well). This method has several advantages over Langmuir-Blodgett deposition and self-assembly methods based on coordination chemistry. These include: Deposition from aqueous solution, extreme flexibility (i.e. no specific functional group is required), no limitation on substrate shape or size, and unlike other self-assembly methods, LbL films do not propagate voids in the film structure.
Current methods of analysis of polyelectrolyte self-assembled films including such spatially-averaged techniques as ellipsometry, GAXRD, neutron diffraction, and UV-Vis spectrophotometry indicate well-ordered layer-by-layer growth. While these techniques are essential for probing physical properties of the overall film, little is known regarding the mesoscale morphology and its influence on the materials properties. Since the polyelectrolyte requires that the properties defined on a nanoscale in an individual layer extend to the macroscale. 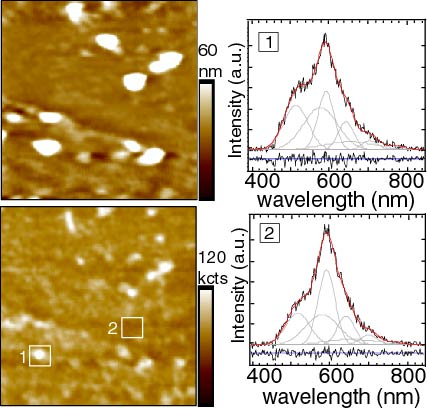 Near-field scanning optical microscopy data from a sample with two spacer bilayers (n = 2) between donor and acceptor layers. Local spectra (10 sec. integration) were collected in the areas marked in the fluorescence image. The spectra (1,2) are shown with a combined fit to the donor and acceptor contribution (red line), and the residual to the fit. Calculated energy transfer efficiencies (c) for spectra 1 and 2 were 0.13 and 0.18 respectively

Our primary research tool, Near-Field Scanning Optical Microscopy (NSOM), allows us a view of the nanoscale structural morphology and fluorescence properties of these films. We have observed that the relationship between the nanoscale properties and the morphology is critical to a detailed understanding of the properties of the film as a whole. Ongoing studies include: Monitoring local energy transfer between specific layers within an LbL film with NSOM to discern differences in interpenetration of polyelectrolytes; using laser scanning confocal microscopy to image single molecules bonded in small concentration to polyelectrolytes within an LbL film; using LbL assembly combined with Langmuir-Blodgett assembly to build superstructures of polyelectrolytes and inorganic quantum dots (CdSe, Au..).