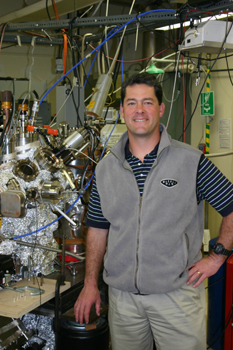 Dr. Buratto obtained his B.S. from the University of Puget Sound and his Ph.D. in 1992 from CalTech. He was a postdoctoral at the AT&T Bell Laboratories for two years before joining the UCSB faculty in 1994.

Through recent advances in near-field optics, optical microscopy and optical spectroscopy are possible with unprecedented spatial resolution (of the order of 10nm) and single molecule sensitivity. In my research we apply near-field scanning optical microscopy (NSOM) and near-field optical spectroscopy (NFOS) to the study of thin films and surfaces on a nanoscopic scale (10nm to 100nm), a regime where many interesting chemical and physical properties are defined. To probe local structure and dynamics, a variety of steady-state and time-resolved spectroscopic techniques will be developed for use with NFOS including: absorption and emission spectroscopies, photoconductivity, linear and circular dichroism, excitation lifetime, pump-probe experiments, second harmonic generation, and optical detection of magnetic resonance (electron spin resonance and nuclear magnetic resonance). The materials studied include self-assembled monolayers, conducting polymers, inorganic semiconductors and biological membranes. The common thread in these materials is the importance of the local structure (and the surface) on the physical properties.

In organic self-assembled monolayer systems developed for nonlinear optics applications, NFOS is used to monitor layer growth. Beginning with very dilute coverage (well separated molecules), the influence of the substrate surface on single chromophore molecules in the monolayer can be determined. This data will provide insight into the chromophore-surface bond. By increasing surface coverage it is also possible to monitor development of local order and disorder in the monolayer and their effect on its static and dynamic properties.

In conducting polymer films used for light emitting diodes (LED's), NFOS explores local order and disorder in the film and its effect on carrier generation, transport and lifetime. The movement of charge carriers in these systems is an important process in light emission and is very sensitive to the local environment. In addition, it is also possible to image a working LED and provide insights into the spatial dependence of the emission. This type of data will have direct implication on the performance of the device.

In semiconductor quantum structures (quantum wells, wires and dots) used for opto-electronics applications NFOS characterizes individual wells, wires and dots through their excitation spectra and dynamics. From this data it is possible to correlate the optical performance of the material with structural parameters. Laser diodes, LED's and photodetectors made from these heterostructures can also be imaged via NSOM, providing a very powerful diagnostic.

In biophysical chemistry, NSOM probes phase transitions in membranes, mapping out domain size and structure. Using molecular probes attached directly to the membrane or to a membrane-bound species such as a protein, NSOM and NFOS probe binding sites as well as diffusion about the membrane surface; an important process in biochemistry and biophysics.