Figure 1. The ion-conduction channel model of a Nafion® membrane placed between two electrodes. The proton conducting hydrophilic channels are shown in white. The red and yellow spots represent catalyst particles in a conventional fuel cell. Particles in yellow are not used effectively. In our work, catalyst particles are deposited through commercially available Nafion membranes (117, 112, and 212) by electrochemical pulse deposition.

The size of the Pt nanoparticles can be carefully controlled by changing parameters such as pulse time delays (X and Y), the potential width, and the concentration of the electrolyte and pH of the medium. Active surface areas of Pt particles synthesized by this technique are determined by cyclic voltammetry (CV). Electrode surfaces are also investigated using Scanning Electron Microscopy (SEM) equipped with an Energy Dispersion Spectrometer (EDS) (Figure 2 ) .

Figure 2. SEM image of carbon cloth electrode after removing overlaying Nafion membrane, showing the presence of Pt particles that have been deposited through the membrane's hydrophilic channels.

The electrochemically active area of a proton exchange membrane in an operating fuel cell is investigated using conductive probe atomic force microscopy. A platinum coated AFM tip functions as a nanoscale cathode as it scans the surface of a membrane, diagramed in Figure 1. This configuration allows investigation of individual proton conducting channels within the membrane, including their number, connectivity, and conductivity, properties critical to fuel cell performance.

Correlations and anti-correlations between hydrophilic surface domains and ion conductive channels were made by overlaying tapping mode and conductive AFM images taken on the same region of a given sample, shown in Figure 2. This comparison gives a direct measure of the electrochemical activity of each aqueous domain. We have found that a large number (~60%) of the aqueous domains present at the surface of a Nafion membrane are electrochemically inactive. We attribute this to a combination of limited aqueous domain connectivity and catalyst accessibility. 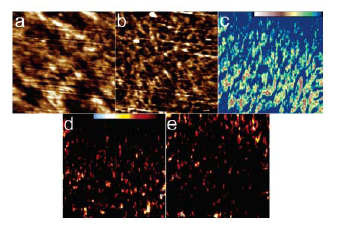 Initial work has focused on Nafion membranes (a perfluorosulfonic acid polymer) and commercially available electrode materials imaged under ambient conditions, while controlled variations in electrode fabrication and membrane preparation have also been explored. Changes in membrane water content and chemical structure may elucidate additional properties of the ion transport channels.

This project is supported by the Army Research Office Multi-University Research Initiative.