Since bulk Au and Ag are known to be relatively inert, the discovery that nanoclusters of Au and Ag on oxide supports catalyze the oxidation of CO and small olefins has stimulated great interest in understanding the nature of the catalytic activity, including the dependence on cluster size. Recently, some research groups have seen catalytic activity in Au particles as small as few atoms in size. Understanding these systems requires a fundamental understanding of how physical and chemical properties change as a function of cluster size, as well as how the clusters interact with the surface.

We employ the use of scanning tunneling microscopy (STM) in our studies of Au and Ag clusters on the surface. Our initial investigations probed the position Ag clusters on the surface of titania, a surface that is known to contain a rich variety of defects, which may effect/enhance the catalytic activity of these systems. The silver atoms do not remain as atoms at room temperature, but sinter into larger clusters of about 50 atoms in size. We were able to scan the same area before and after the deposition of silver to reveal the nucleation sites of the clusters. 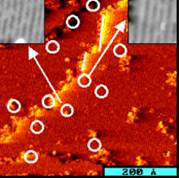 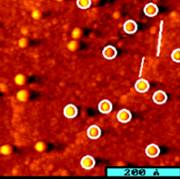 Figure 1. STM images show (left) a clean TiO2(110)-1 x 1 surface. (right) The same area after exposure to 0.06 ML of Ag. The white circles in (l) indicate the nucleation positions of the Ag clusters determined by comparison with (r). The tunneling conditions in (r) were adjusted to avoid tip-cluster interaction.

The silver monomers form nucleation sites mainly at oxygen deficient "rough" patches of 1x2 surface reconstruction. The STM tip can also be used to remove clusters from the surface, and the area beneath the cluster can be examined.

Figure 2. (left) An STM image shows three Ag clusters on a clean TiO2(110) surface with oxygen vacancies. (right) One of the three clusters in (left) was removed using the STM tip. The area underneath the removed cluster as indicated by the circle shows a similar density of oxygen vacancies as the clean area.

Many oxygen vacancies (bright features between bright Ti rows) can be seen in the area below the removed cluster. We find that the density of vacancies below the Ag cluster is similar to the vacancy density elsewhere. This is contrary to what has been observed by other groups for Au on titania, which is more catalytically active towards CO oxidation. The current notion is that Au "getters" vacancies, that is, Au clusters are thought to accumulate a high density of vacancies beneath them, which may enhance catalytic activity. Assessing this type of information is critical in the understanding of catalysis on the nanoscale.

Supported gold clusters as small as 3 atoms in size have shown catalytic activity, and some groups claim that even mononuclear species of gold may be responsible for the catalytic nature of theses systems, whereas other sizes such as 2 or 4 atoms, are not reactive at all. Therefore, understanding how the chemical and physical properties of metal clusters change one atom at a time may be key to revealing a bigger picture. Our current goal is to create size-selected model catalysts to enable us to study the difference between active and nonactive sizes. To do so, we have merged our STM chamber with a size-selected cluster source as shown below. The cluster source is capable of selectively producing clusters of Au and Ag up to ~30 atoms in size. The first step was to create size-selected clusters that remain intact, free of sintering or fragmentation, on the surface of titania, to serve as model catalysts.

The clusters are created in the cluster source using pulsed laser ablation, and positively charged clusters are accelerated into the magnet, where they are size-selected, and sent into the deposition chamber. The kinetic energy of the incoming cluster can be controlled by applying a repelling positive bias voltage on the titania sample. Figure 4 shows STM images of Au(n)^+ (n=1-8, A-H, respectively), which have been deposited as on the surface of titania. Au1 is observed to have high mobility on the surface, forming large clusters of tens of atoms. Au^2 and Au^3 are not mobile, laying flat on the surface above titanium atom sites. Au^4 shows a very interesting two-lobed structure, as does Ag^4 (not shown here), and also lays flat on the surface. Au^5-8 have an incremental increase in height by ~1 Ang, forming multi-layer structures.

Since successfully preparing titania surfaces with size-selected clusters, most recently our efforts have turned to understanding the chemical interaction of the clusters with gases involved in the catalytic cycle such as CO and O2. A temperature programmed desorption system was recently installed in the deposition chamber, and is currently being used. Concurrently, we are performing scanning tunneling spectroscopy on the clusters, and examining the effect of exposure to catalytic gases with STM. We hope to uncover the size-dependent properties of these clusters which are responsible for their unique activity.